The Beginning of a Parish 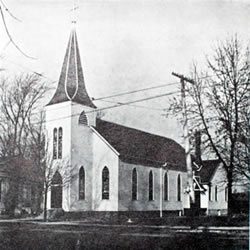 The year was 1907, Plainfield was a quaint town of 1100 people. With the advent of the trolley, it had become a very popular place to go on outings during the summer months, but there was one problem that kept many from visiting Plainfield as a summer resort — there was no Catholic Church in the town and the nearest one was in Joliet.

As a result of his visit a vacant church on the main street was purchased from the trustees of the Universalist Church. The building, which was built in 1868, was purchased for the sum of Two Thousand and Fifty dollars. Which was then enlarged and remodeled. The parish was named St. Mary’s Immaculate Conception and the first mass was held on Palm Sunday, April 1908.

At the request of the Most Rev. Archbishop, Father McNamee and his assistants, Fathers Byrne and McGuire, took charge of the congregation until such time as it would be deemed self-supporting and could have a resident pastor. Every Sunday one of the priests from St. Mary’s Joliet, went out by the nine o’clock car and celebrated Mass at 9:30.

Father Henry Epstein was the first resident pastor of St. Mary’s Church. While the rectory for him was being constructed, Father Epstein lived some time at the rectory of Good Counsel Parish Aurora, Illinois with Father Linden. He also stayed at the Pryor home on James Street in Plainfield. Mr. Proctor built the rectory for approximately four thousand dollars. An avid horseman, Father Epstein covered the parish territory on horseback to visit his parishioners. The horse was kept in the barn in back of the rectory. At the time the church was purchased, there was little or no basement so it was dug by hand, all of the work was done by parishioners. Dirt, which was hauled out by buckets, was hauled away by wagon. The Sacristy and Sanctuary were added to the original structure, and a short time later the Choir Loft was built. Also, shortly after Father Epstein was installed as pastor, stained glass windows were added to the church. During the pastorate of Father Epstein, sometime in 1909-1910, a five-acre tract of land was purchased for a cost of $875, according to an early church report, for the St. Mary Immaculate cemetery. One of the first internments was James Doyle in 1910. After seven years of faithful service, Father Epstein was appointed pastor of St. Francis of Assisi Church in Chicago. On November 24th, 1916, His Grace, the Most Reverend Archbishop Mundelein, chose Rev. Peter Lieser as the new pastor of St. Mary’s.

For many years parishioners had inquired about the possibility of having a school in Plainfield. Finally, assurance was given that the Sisters of St. Francis of Mary Immaculate Order would be available for staffing the school. With the permission of Bishop Martin McNamara, a six-acre tract of land in Plainfield Acres was purchased in October 1953 at the cost of $9,000.00. On Sunday, November 7, 1954, numerous parishioners and friends gathered to witness Rev. Herman Ezell turn the first shovel of dirt for the parish school. After Father Rotondi was appointed pastor in June 1955, he took over the supervision of the completion of the construction and bought the house on the N.E. corner of Division and Chicago to serve as a convent. The cost of the property was $18,500. The expense for remodeling and furnishing the house amounted to $4,000. At the time of Fr. Rotondi’s appointment, only $30,000 had been paid on the pledges for the 6-room school whose total cost of construction and the furnishings amounted to $119,000. The doors of St. Mary’s School opened in September 1955, with an enrollment of 167 students and a faculty of four religious with Sister Audrey Kappes as principal. Sister Miriam David, Sister Gilberta, and Sister Matthias completed the faculty. On May 13, 1956, at 3 p.m., St. Mary’s School was officially dedicated by Bishop Martin D. McNamara. The students in school uniforms formed an aisle for the Bishop and Honor Guard of the Fourth Degree Knights of Columbus. This ceremony was followed by Confirmation at 4 p.m. for 117 children and 32 adults administered by Bishop McNamara.

A Growing Parish needs to Expand

In 1956 Monsignor Rotondi purchased an acre of land south of the school to provide more playground and parking space. This land on Frederick St. cost $4,500. In 1962, foreseeing the need of a new and larger church for the growing parish, another acre north of the school, facing Rt. 59, was purchased for $7,500. In 1963 the house of William Schmars and its acre of land was acquired, for $25,000, to provide the ample space needed for the new church and parking area. The house was then moved to just south of the school at a cost of $4,800. It was remodeled and served as the new convent. In 1966 the growing and urgent need for a new building for St. Mary’s church in Plainfield was very evident. The number of families belonging to the parish had increased to over 600. The seating capacity of approximately 250 in the 100-year-old structure was not meeting the needs of the parish at the five Sunday Masses. The old building was beyond expansion and repair. 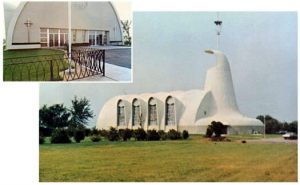 Monsignor Rotondi turned the first shovel of dirt at the Ground Breaking Ceremony which was held for the New St. Mary’s Church on Route 59 a half mile south of U.S. 30 on Sunday, October 29, 1967, in the presence of about two hundred interested parishioners and friends. The construction of the new church, which was of unusual design based on the thin shell parabola type of construction, took nearly 3 years to complete. The cost of the building and furnishings cost $750,000. The exterior of the building measured 186 by 88 feet. The new edifice was designed by Frank LaPasso & Associates, Architects-Engineers, of Chicago. It combined the modern with the traditional. Its interior was devotional and awe-inspiring. It accommodated itself to the requirements of the new forms of Divine Worship. In keeping with the new Liturgy, the floor is ramped towards the sanctuary and the seating was displayed to provide perfect visibility and sight lines to the Altar of Sacrifice. The Sanctuary was punctuated by a conical shape structure, which had at its frustum a faceted glass skylight flooding the Sanctuary with myriads of colored lights. Rising above the faceted glass was a campanile (tower) topped with a cross whose height was over 100 feet above the ground. At the narthex between the two sets of entrance doors was the Baptistry. The seating capacity was 820 in the nave and 160 in the balcony. There was also crying room which held 20. All the windows were faceted glass, which cast a soft glow of natural light on the interior. The new St. Mary Immaculate Church was dedicated Sunday, September 26, 1970, at 12 noon by the Most Reverend Romeo R. Blanchette, D.D., Bishop of Joliet. He was assisted by Monsignor Armand J. Rotondi, M.D., pastor of the parish; Father Richard M. Ruffalo, Master of Ceremonies of the Diocese; Rev. Richard Shonka, O.S.B.; Rev. John J. Daum and Rev. Christopher Marzano, C.S.V.

In the afternoon of August 28th, 1990, at 3:28 p.m. the Plainfield community was torn apart as a category F5 tornado carved a path of destruction, killing a total of 29 people. By 3:45 p.m., the tornado had directly struck St. Mary Immaculate Parish school, killing the principal, Sister Mary Keenan, music teacher Gloria Sanchez and Howard Hawes Jr. and injuring others. The church building was spared a direct hit, but suffered major damage.

In 1991 the construction of the new church campus began in earnest. The new church was completed in 1993. The school was open in the fall of 1993.

1995 saw the arrival of Fr. Tony Nugent as Pastor. In 1996 the need for a larger school and an increase to parish facilities was realized. The number of registered families was on a steady increase and the forecast was for continued growth. The parish buildings were already full to capacity, the school was turning away kids and there were inadequate meeting facilities to meet the needs of the growing parish. In 1996, Fr. Tony Nugent started the Building Dreams Campaign, a capital campaign to raise the funds to add an addition to the church and school. Construction started in 1998 at a cost of 4 million dollars. It took 2 years to complete, the work and was finished in the winter of 2000. Fr. Rick Dochstader, who arrived as an Associate Pastor in 1998 died suddenly on September 5, 2003. June 2, 2001, saw the ordination of Fr. David Medow, a former Lutheran minister who is also the first married priest in the Joliet Diocese. In June 2005 Fr. David became the Pastor of the parish. Later that year, the parish completed a month-long process of prayer and discernment, which led to our parish vision: “One Family in Faith, Making Christ Known.” Membership of the parish has swelled to over 8,100 families. Some 75% of our parishioners are under 40 years of age and 40% of the St. Mary Immaculate Parish family is under 18 years old! The parish school has an enrollment of over 550 while over 2,000 children are involved in Religious Education classes. The number of ministries of the parish has grown and there are new opportunities for Adult Faith Enrichment and events to enrich the spiritual life of individuals and families. The growth of the parish is expected to continue for many years to come.

Into an Exciting Future!

As you can see, there is a lot going on here at St. Mary’s. As we move into the future, guided and nourished by God, we thank God that you are joining the parish family. We also invite you to become an active part of the life and ministries of St. Mary Immaculate Parish. You have a vital role to play in the holy work that God has given this faith community. Let your faith shine through your generous gift of time, talent and treasure to the glory of God. God bless you.